A “heart attack”, or Myocardial Infarction (MI) and Sudden Cardia Arrest (SCA) are not the same thing, in fact they are completely different from each other. It’s almost like comparing apples to oranges. Sure they are both fruit, but their not the same. 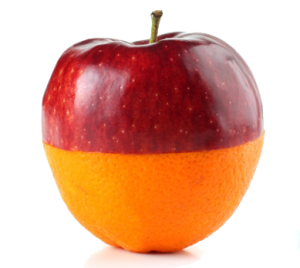 Let’s take a look at each of them so that we can see how they differ.

In contrast to a heart attack, sudden cardiac arrest is caused by an “electrical problem” which creates an arrhythmia or abnormal heart rhythm in the heart.

The arrhythmia’s that may occur during a sudden cardiac arrest (SCA) are: Ventricular Fibrillation (VF): (the heart quivers all over instead of beating), Ventricular Tachycardia (VT)(the bottom of the heart beats too fast causing no blood to be pumped out of it), Asystole (the absence of all movement in the heart), or Pulseless Electrical Activity (PEA): (the heart should be producing a pulse, but is not). 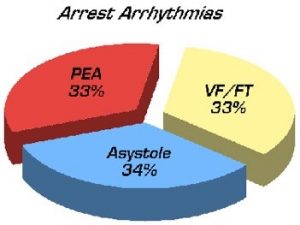 Ventricular Fibrillation occurs when the heart’s lower chambers (ventricles) suddenly develop a rapid, irregular rhythm (ventricular fibrillation) causing the ventricles to quiver rather than contract. The chaotic quivering motion of the ventricles renders the heart an ineffective pump that can no longer supply the body and brain with oxygen.

Within seconds, the person loses consciousness and has no pulse. Only immediate emergency treatment, such as cardiopulmonary resuscitation (CPR) and external defibrillation with an Automated External Defibrillator (AED), can prevent death from sudden cardiac arrest.

In the case of VF/VT, defibrillation terminates the arrhythmia by depolarizing a critical mass of the heart muscle, thus allowing a normal sinus rhythm to be established. When the time to defibrillation is less than 2 minutes, the patient has an 80% chance of being successfully resuscitated. However, prolonged arrest intervals force the body to deplete its stores of oxygen and high-energy adenosine triphosphate (ATP) nutrients necessary for re-establishing a normal perfusing rhythm. Consequently, a victim’s chance of surviving a SCA decrease by 10 to 15% for every minute of arrest with a dismal chance of resuscitation occurring at 10 minutes. 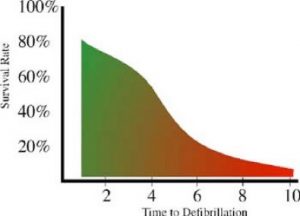 In the case of Asystole or PEA, the treatment is intravenous delivery of epinephrine along with high quality CPR. Defibrillation is NOT used in these arrests as the problem lies in the response of the myocardial tissue to electrical impulses.
Another approach that researchers have begun to embrace is a concept first pioneered and published by Dr. James Niemann of Harbor-UCLA in 1992 where a period of CPR in animals prior to attempting defibrillation in prolonged cardiac arrest was shown to improve outcomes. Recently, several large studies have been published that have demonstrated a significant increase in survival rates as a result of CPR prior to defibrillation in arrests of greater than four minutes.
Manual CPR was developed to prolong the treatment window of a person whose heart has stopped beating. The theory was that blood flow could be generated by physically pushing the sternum 2 to 2.4 inches into the chest, thereby compressing the chambers of the heart between the sternum and the spine. Trauma is almost always induced as the chest is subjected to a repetitive, focused force on the center of the sternum. 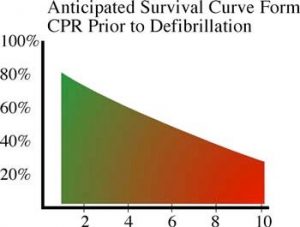