Revolution on the Stroke Front

Every year, more than 800,000 people in the US suffer Stroke. The majority are Ischemic strokes- a type of Cerebrovascular Attack, or CVA- in which a blood clot either forms within, or makes its way to the brain, where it can block a blood vessel meant to supply blood to the brain. This sudden reduction in blood flow to the brain deprives brain cells of the oxygen they need to survive, resulting in brain damage.

A well-documented effect of Stroke, and the resulting damage to the brain, is a breakdown in communication between the region of the brain affected, and the portion of the body it usually controls. This can present itself as paralysis or numbness on one side of the body, great difficulties in understanding speech, and disturbances with vision.

Since 1996, doctors have treated Ischemic stroke with a rather amazing drug, tPA- which is administered intravenously to help dissolve clots- but unfortunately must be given to patients very quickly after symptoms appear- within about 3 hours to be exact. It also doesn’t work for all patients.

Enter a new method- one that is not drug-based- and that offers a promising future of radically high-tech stroke treatment. It involves physically locating and removing the blood clot.

Patients are prepped and sedated, before having various catheters inserted into their femoral artery, in the groin. Large banks of screens around the patient assist doctors in medically imaging the long, winding journey, up into the heart’s aorta, then into the carotid artery, which transports blood to the brain via the neck. Finally, the inserted catheter reaches the brain, and is positioned in the artery containing the clot.

Inside the catheter’s tip is a very thin piece of equipment resembling a mesh net made of metal wiring. Once the clot is reached, doctors will deploy the device and enmesh the clot, allowing them to quite literally extract the clot by pulling, or towing, it out of the body, back through the winding tubes of arteries from the brain to the groin.  A brilliant analogy for this process would be the way in which a plumber uses a plumbing “snake” to pull serious clogs out of a drain.

If the process is successful, blood flow will be immediately restored to the brain and, rather miraculously, within about 10-20 minutes, the paralysis effects, as well as the speech difficulties will begin to dissipate and the patient’s ability to speak often times completely returns.

This amazing technique has been on the rise in terms of popularity since 2015, when the AHA officially added it to their recommended standard medical care guidelines.

Despite this fast and effective revolutionary technique being on the rise, stroke in general is still- for all patients- a race against time. Both interventions have a limited window for being administered, meaning detection and activation of 911 is still the first and foremost step to saving lives affected by stroke.

Remember, getting an ambulance and paramedics to arrive quickly and transport the victim to a comprehensive stroke treatment center is still dependent on you calling 911 the moment symptoms appear. 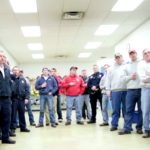